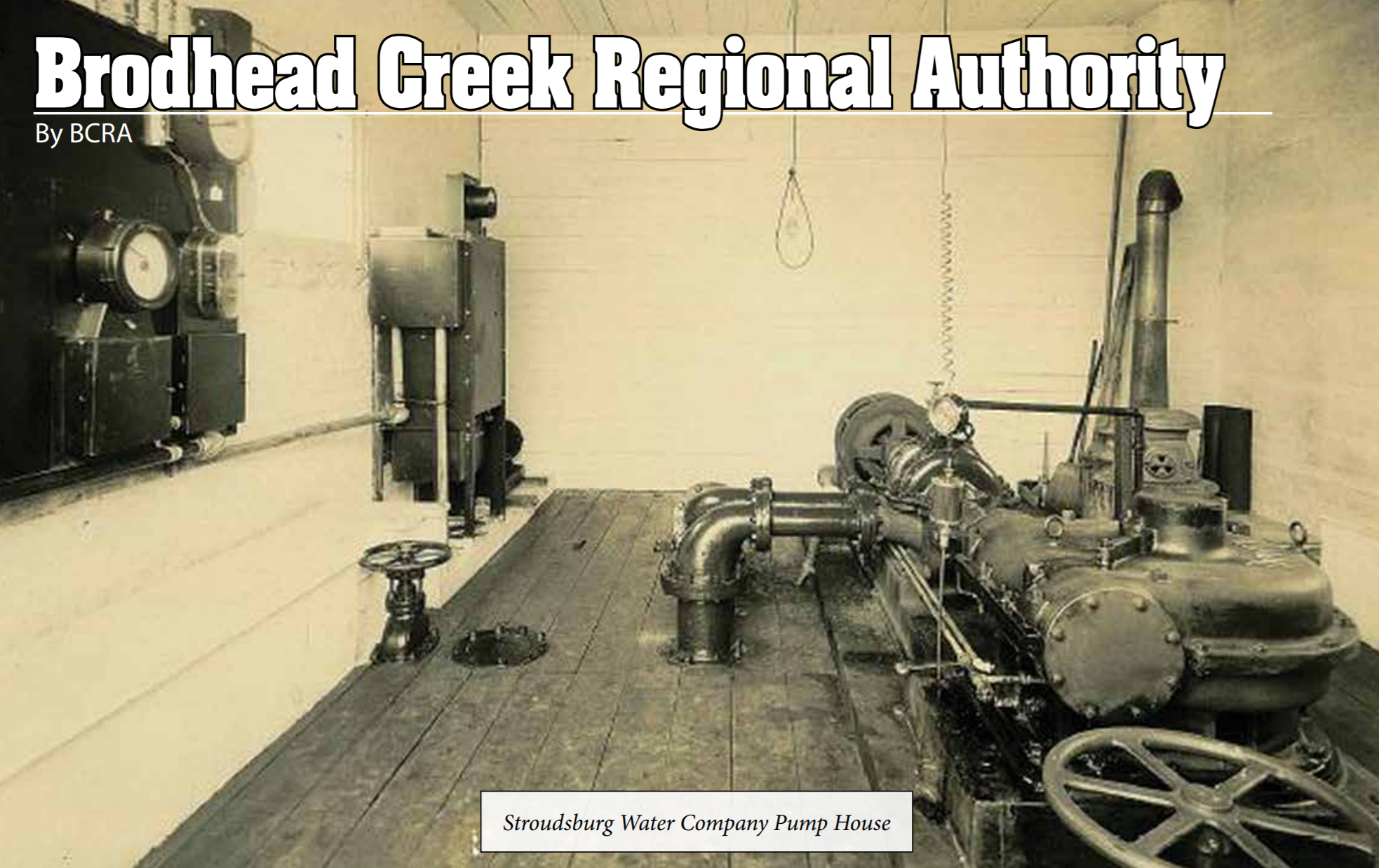 A History of the Brodhead Creek Regional Authority

Stogdell Stokes founded “Stokes Mill” on the west bank of the Brodhead Creek in Stroud Township perhaps as early as 1825. This Mill was actually a complex of business activities including a grist mill and lumber mill taking advantage of the surrounding Pocono forests. Stephen Girard, a Philadelphia merchant, was one of his timber customers.

Mr. Stokes was involved in a variety of civic projects both political and economic. He was active in the formation of “Monroe County” and establishment of Stroudsburg as the County seat. He founded the Jeffersonian Republican newspaper in 1840. In the 1870’s N.S. Wycoff owned and operated the “Stokes Mill” business. At the age of 90 Stogdell Stokes passed away and was laid to rest in the Orthodox Cemetery on Ann St. with his wife Eliza.

The Stroudsburg Water Company was organized in 1876 on the opposite bank from the original Mill. It was a private water company that utilized the “Big Spring” at Stokes Mill to provide water to its customers. It boasted that it could supply a “million gallons a day” of pure spring water to its customers as it built a pump station and water mains to distribute its product. Its first large customer was the roundhouse DL&W railroad located at “Gravel Place” across from Kulp Foundry. In 1953 the Borough of Stroudsburg purchased the water company and created the Stroudsburg Municipal Authority which served customers in the Borough and Stroud Township. From 1960 until the present it has built a water plant, drilled wells, expanded distribution system, installed pump stations and erected storage tanks as it branched out to now serve the Borough of Stroudsburg, and the Townships of Stroud, Smithfield, Pocono, and Hamilton.

In 2005, the Stroudsburg Municipal Authority became the Brodhead Creek Regional Authority (BCRA) to better express both its regional nature and its historic ties to the Brodhead Creek. It now supplies over 2.5 million gallons of water per day to over 5,400 billing accounts serving over 22,000 people as well as 1,000 businesses and industries.

On March 1, 2011, the BCRA assumed ownership and operation of the Stroudsburg wastewater treatment plant. It is currently undertaking a $37 million project to upgrade and expand the plant which is expected to be completed in 2013 to serve the Borough of Stroudsburg and the Townships of Stroud, Pocono, and Hamilton.

Taking a bath requires up to 70 gallons of water. A five-minute shower uses only 10 to 25 gallons.